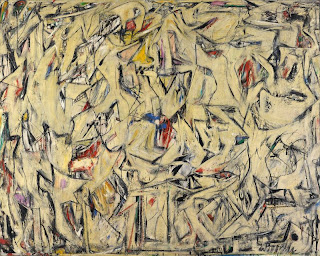 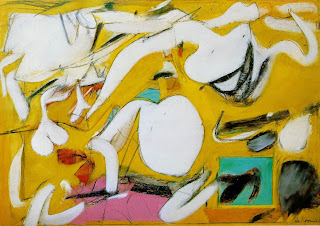 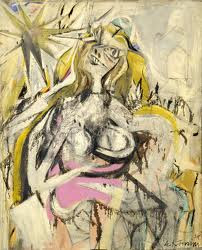 Willem de Kooning was born in Rotterdam on 24 April 1904. In 1916 de Kooning began to train as a commercial artist; at the same time he attended evening courses at the Rotterdam Academie voor Beldende Kunsten en Technische Wetenschappen (Rotterdam Academy) until 1924.

Afterwards he studied at the Académie royale des Beaux-Arts in Brussels and the van Schelling School of Design in Antwerp. In 1926 the young artist emigrated to the US, where he worked illegally in New York as a commercial artist, window dresser, sign painter and carpenter. There Willem de Kooning met other artists, including John Graham, Stuart Davis and Arshile Gorky and worked for the Federal Art Project, for which he did murals between 1935 and 1939. From 1935 in fact, he was able to devote himself entirely to painting. He shared a studio with Gorky and his early pictures were influenced by Gorky's Surrealist style and by Picasso's painting. However, de Kooning was also inspired by the Gestural branch of the New York School as well as Jackson Pollock and Franz Kline. Contact with Pollock and Kline inspired him to do his first black-and-white abstract works in 1946; he returned to them in 1959. From 1950 he developed his first "Women" pictures, which are notable for such vehemence of handling that they at first caused a scandal. He retained this type of figuration until the 1990s.

At the same time Willem de Kooning also worked on fairly abstract landscapes, mainly during the years between 1957 and 1961. Naturalised as an American citizen in 1962, de Kooning left New York the following year to settle at Springs on Long Island. In 1964 he received one of the greatest distinctions awarded in America, the "Presidential Medal of Freedom". In 1970 he turned to sculpturing in bronze. At the latest from his participation in the 1954 Venice Biennale, where he was represented with one of his most important works, "Excavation", Willem de Kooning has been regarded as a leading exponent of Abstract Expressionism. These years of his career were filled with numerous shows of his work and retrospectives. His exceptional œuvre is suffused with the duality of traditional figuration and Gestural Abstract painting. Willem de Kooning died in Springs, USA on 19 March 1997.