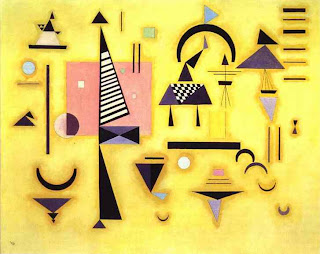 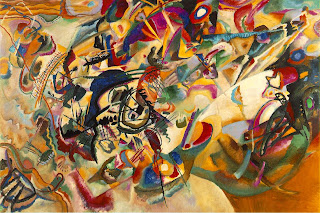 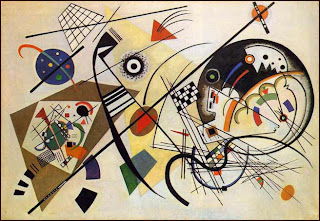 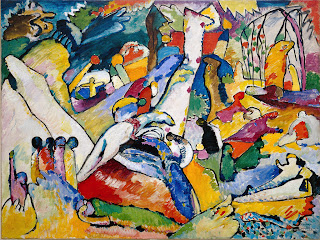 Wassily Kandinsky was born in Moscow, on December 4th, 1866. His parents both played piano, so he was encouraged to learn how to read and play music at an early age. Young Kandinsky played cello and piano, and even though we know him best as a painter, music has always been the main inspiration behind his work. When he was only 5 years old,, his parents divorced, so he moved in with his aunt in Odessa, continuing to play music, and learning to paint; but the gifted young man did not choose to study art or music when he later enrolled at Moscow University, choosing instead the "safer" fields of Economics, Politics, and Law. During his years at the university, Kandinsky explore spirituality through writing. He also taught at the Moscow Faculty of Law. For Kandinsky, the arts were no more than a hobby.

It wasn't until 1896 that Kandinsky decided to seriously study art. The sudden change in his life had been triggered by his interest in the work of Monet, an artist who's work has had a profound impact on many others. Kandinsky was fascinated by the impressionist artist's style, as he had never before seen paintings which weren't meant to perfectly imitate reality. Kandinsky studied in Munich, under Anton Azbé, sketching, anatomy and life drawing. He then studied under Franz von Stuck, then moved on to found and the avant-garde Phalanx exhibiting society, and write about art. His administrative skills served him well as director of the Phalanx exhibiting society, while his writings about spirituality had prepared him for his works about color theory.

Kandinsky was a synaesthete, meaning that he could see sound as color, and vice versa. His writings on color theory sometimes bordered on the mystical, as his own interpretations and visual impressions took on almost paranormal qualities. In 1906, Kandinsky settled in Paris with his mistress, and Gabriele Münter, who was also a talented art student. A year later, the two were separated, and Kandinsky suffered a nervous breakdown, and relocated to Bavaria, so he could lead a quiet life, and concentrate on his art. Kandinsky experimented with color and minimal composition, eschewing reality from his work. Like music, his paintings were renderings of emotional states, and while it is easy to feel sadness when looking at an image of a tragic scene, Kandinsky's work would communicate the same feelings without incorporating representational elements.

Kandinsky's work was shown in galleries across Europe, and while there was never anything in the paintings themselves that would be shocking to the public, the sheer abstract nature of his work would stir controversy. One could say Kandinsky gave birth to abstract art.

Kandinsky returned to Munich in 1908, bristling with creative energy. A year later, he founded the New Artists Association of Munich, and creating many abstract glass paintings based on musical elements. He also published another book on Spirituality, this time in relation to art, and he wrote several plays and poems. Along with New Artists Association, Kandinsky was also a member of the Blaue Reiter (a.k.a. Blue Rider), which he founded with fellow artist Franz Marc, and was also a member of the Bauhaus movement with composer Arnold Schoenberg and Paul Klee . Kandinsky was involved in many movements, learning and experimenting with words, music, and painting.

On music, Kandinsky had this to say: "Color is the keyboard, the eyes are the harmonies, the soul is the piano with many strings. The artist is the hand that plays, touching one key then another to cause vibration in the soul."

During the the first world war, Kandinsky moved back to Russia, where he took an interest in the burgeoning constructivist movement, which was based on hard lines, dots and other geometric shapes. While in Russia, he also married a young art student by the name of Nina Andreevskaya, and as he had before, he immersed himself behind the scenes as well as in the spotlight, becoming a key player in the administration of several educational, and government run art programs, helping to create the Institute of Artistic Culture and the Museum of Pictorial Culture in Moscow. Alas, clashing views with some of the other artists made him return to Germany, where he would teach at the Bauhaus school, this time focusing on introductory art, and Murals. There are very few remaining examples of the work Kandinsky produced in Russia, but many of the paintings he created in Germany have survived.

Over the years, Kandinsky participated in several solo and group showings around the world, which earned him the admiration and support of Solomon Guggenheim. In 1933, Kandinsky was granted German citizenship, but the rise to power of the Nazi party would mean the closing of the Bauhaus school, forcing him to relocate once more, this time in Paris would settle down in Neuilly a quiet suburb, where he continued to work tirelessly on new paintings. Kandinsky was granted French citizenship, and he remained in France for the remaining years of his life. Even in his twilight years, Kandinsky still managed to shock the art world and innovate. Even though he was a recluse, he had many friends in the artistic community, and he would often get visits from artists such as Joan Miro, Sophie Tauber, and Alberto Magnelli.

Wassily Kandinsky continued painting until his death, on December 13th, 1944.

"I applied streaks and blobs of color onto the canvas with a palette knife and I made them sing with all the intensity I could..." Wassily Kandinsky