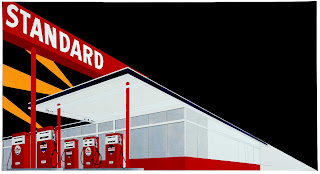 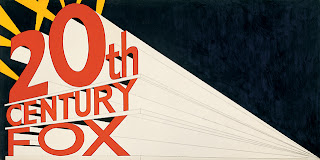 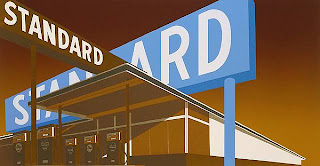 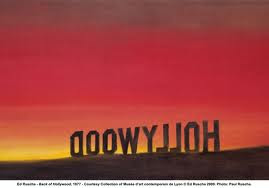 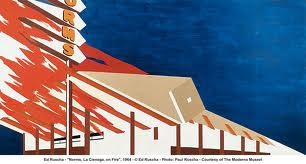 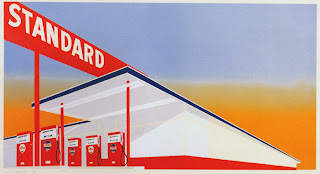 Born in 1937 in Omaha, Nebraska, Edward Ruscha moved to Oklahoma City in 1941 and to Los Angeles in 1956 to attend the Chouinard Art Institute.
He had his first solo exhibition in 1963 at the Ferus Gallery in Los Angeles.

Ruscha has consistently combined the cityscape of Los Angeles with vernacular language to communicate a particular urban experience. Encompassing photography, drawing, painting, and artist books, Ruscha's work holds the mirror up to the banality of urban life and gives order to the barrage of mass media-fed images and information that confront us daily. Ruscha's early career as a graphic artist continues to strongly influence his aesthetic and thematic approach. Ruscha has been the subject of numerous museum retrospectives, which have traveled worldwide, beginning in 1982 with the San Francisco Museum of Modern Art, the Centre Georges Pompidou in 1989, and the Hirshhorn Museum and Sculpture Garden in 2000. In 2001, Ruscha was elected to The American Academy of Arts and Letters as a member of the Department of Art.

The following year a major exhibition of Ruscha's entire body of work opened in Spain at the Museo Nacional Centro de Arte Reina Sofia. "Leave Any Information at the Signal," a volume of Ruscha's writings, was published by MIT Press in 2002, while the first comprehensive monograph on the artist was written by Richard Marshall in 2003. In 2004, The Whitney Museum of American Art organized two simultaneous exhibitions: "Cotton Puffs, Q-tips®, Smoke and Mirrors: The Drawings of Ed Ruscha," which traveled to the Museum of Contemporary Art, Los Angeles and then to the National Gallery of Art, Washington, D.C., and "Ed Ruscha and Photography." Also in 2004, the Museum of Contemporary Art in Sydney mounted a selection of the artist's photographs, paintings, books and drawings that traveled to the Museo Nazionale delle Arti del XXI Secolo, Rome and to the Scottish National Gallery of Modern Art. Another exhibition of Ruscha's photographs was organized for the Jeu de Paume in Paris in 2006.

Ruscha was the United States representative at the 51st Venice Biennale in 2005. In 2009, the Hayward Gallery, London mounted a retrospective of the artist's paintings, “Ed Ruscha: Fifty Years of Painting,” (traveled to Haus der Kunst, Munich and Moderna Museet, Stockholm in 2010). “Ed Ruscha: Road Tested,” opened at the Modern Art Museum of Fort Worth, Texas in January 2011. The Hammer Museum in Los Angeles prepared an exhibition with Ruscha inspired by Jack Kerouac’s On the Road, which opened in mid-2011 (traveled to Denver Art Museum, Colorado in December 2011 and Museum of Contemporary Art, North Miami, Florida in May 2012). In July of 2012, "Reading Ed Ruscha" opened at the Kunsthaus Bregenz in Austria. Also in 2012 Ruscha curated “The Ancients Stole All Our Great Ideas" at the Kunsthistorisches Museum, Vienna, working from the art and natural history collections.